How is our health affected by our genes?

The human body consists of about 50 trillion individual cells; each of these cells has a nucleus, which contains the human chromosomes. A chromosome consists of a “very closely wound thread”, the so-called DNA double helix. 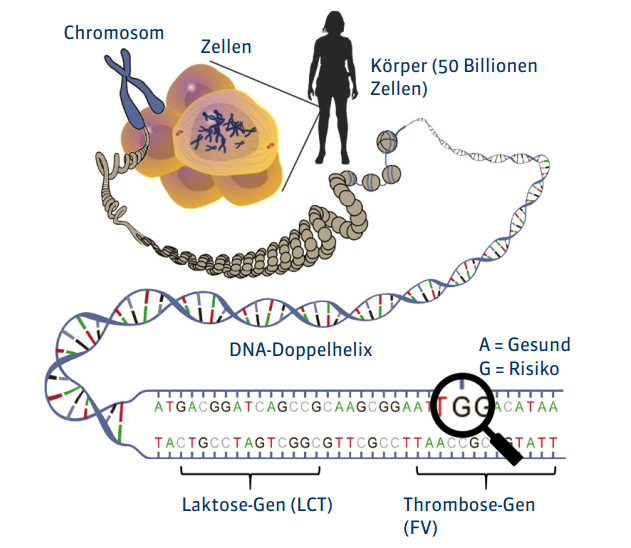 The DNA is the genetic code itself, the blueprint of the human body. This genetic code consists of approximately 3.2 billion letters, and about 1% of this code represents the genes. A gene is an instruction for the body, and usually has only a certain function. For example, there are genes whose function it is to tell the body how it can generate the color blue, which then leads to the child having blue eyes. There are also genes, which tell the body how to process food, in order to subsequently receive the nutrients.

Unfortunately, our genes are not error-prone, and each of us has certain genetic defects either inherited from our parents, or which have formed by misfortune, and now have a negative effect on our health. These genetic defects may have different consequences: weaken our immune system, increase our risk of heart attack, or give us bad sight. They trigger asthma and allergies, or cause overweight if we have an unregulated diet. Of course, each of us carries other genetic defects, which means that some people have a higher risk of heart attack, while others are, for example lactose intolerant. Diseases that occur frequently in certain families are a good example of the fact that individual risk of illness can be different from family to family, and from person to person.

These polymorphisms can affect our health, although in many cases they are not causing a disease, but merely an increased risk of disease. Other external factors (such as environment or our own lifestyle) influence the breaking out of the disease. If a person is, for example, lactose intolerant, due to a genetic defect, this person is perfectly healthy, as long as she does not drink milk. Problems appear only in conjunction with certain environmental influences – in this case, eating or drinking products that contain lactose. It is the same for other diseases as well. For example, if a regulatory gene for iron intake is defective, this can increase the risk of an iron assimilation disease, and preemptive measures are necessary in order to delay the apparition of the disease or even to stop its developments.

Experts estimate that every person carries about 2.000 genetic defects or variations, which may affect his health, and, in some cases, cause illnesses. A variety of factors can cause changes in our genes (also called mutations); in rare cases, this can have positive effects, but mostly interfere with the function of the genes and have a negatively impact on our health.

The most well known cause, as presented by the media and Hollywood, is radioactivity; the radioactive rays penetrate into the cells and our genetic code, thus randomly damaging our genes.

Another cause of mutations and genetic defects are certain substances such as carbon, which can be ingested from burnt food. It penetrates the cells and damages our genes, which can lead to colon cancer, among other form of cancer. The UV sun radiation can also damage our genes, and leads to diseases such as skin cancer.

External influences can affect individual genes and disrupt their function, but the majority of our defective genes are inherited from our parents. Each embryo receives half of its genes from the father and half of its genes from the mother, resulting in a new human being with some of the characteristics of each parent. The genetic defects are unfortunately passed together with these genes; for example, a genetic defect that causes heart attack may pass from the father to the child and further to the grandchild and so on, leading to passing the same disease to each generation. Whether the genetic defect is passed, however, is determined randomly, and it may be that some of the grandchildren carry the defective gene and others do not.

This makes each person unique, and by the accumulation and combination of different genetic defects, each person carries other health-inherited weaknesses. With the latest technology, it is now finally possible to examine one’s genes and determine his personal health risks. In many cases, taking advantage of this knowledge, and following some precautionary measures, the diseases may even be prevented. This is the next step in preventive medicine and a new generation of health care.